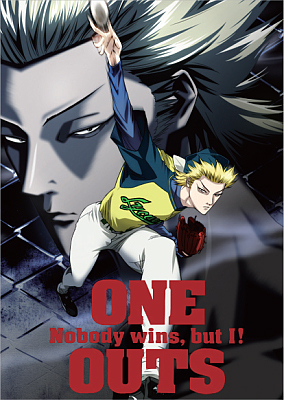 A hit manga that was serialized in Shueisha's Business Jump from 1998 to 2006, is now an animation series produced by MADHOUSE. The original author is Shinobu Kaitani, who is in the spotlight for writing the original manga which was adapted into the hit drama "LIAR GAME." Using professional baseball as a background, this animation series is psychologically entertaining, highlighted by ball games set up by the lead character, Toa Tokuchi, that penetrate the deepest part of the psyche.

In the animation, the mind games of the lead characters, which goes completely against the common theme of "the lead character making efforts and guiding his team to victory" of traditional baseball manga, unfolds with the same sense of tension as the original manga.

Hiromichi Kojima of the "Saikyo Saitama Lycaons" is a skilled baseball player, but has not won a single game and is known as the "unlucky batting genius". Kojima knows that he is missing something in order to win. To search for what he is missing, he works hard at a voluntary training camp in Okinawa. There, he meets Toa Tokuchi, a legend who has never lost a gambling type of baseball game called "One Out"!!

After two games of "One Out", Kojima, who wins with his vitality, sees that Toa can lead the Lycaons to victory, and scouts Toa to join the team. With Toa as part of the team, the fate of the "Saikyo Saitama Lycaons," a small and weak team that had always remained in the B class for baseball, starts changing in a major way...!