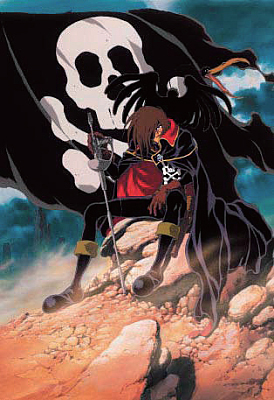 THE ENDLESS ODYSSEY OUTSIDE LEGEND

On a quest to a desolate planet many light-years away from Earth, Professor Daiba and his colleagues uncover a new galactic terror among the ancient ruins they excavate. This new unworldly trans-dimensional specter is the Nu. Unleashed from its long slumber, the Nu is bent on returning to this space-time and sending Earth and all humanity to a ghostly subspace dimension. Brandishing the power of an ancient tablet, Professor Daiba temporarily subdues the Nu and escapes its clutches, but his four colleagues are destroyed, only later to become possessed minions of the Nu. With his son, Tadashi in tow, Professor Daiba continues on his voyages but harbors the secret of the Nu. Then, one day, the four Nu apparitions appear and exact their revenge on Professor Daiba. About to face the same the fate as his father, Tadashi is saved by none other than the legendary space pirate, Captain Herlock! Watch as together they join forces to fight to destroy the Nu and save the earth...and see a secret betrayal unfold before your eyes.

From the creator of "Galaxy Express 999" and "Star Blazers" comes this thrilling animation series from Leiji Matsumoto.