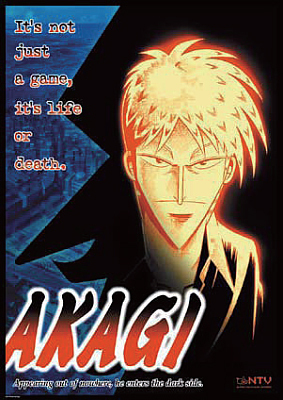 It's not just a game, it's life or death

Tokyo, 1958. A man seriously gambles at a mahjong parlor. He's playing against members of the Ryuzaki yakuza clan. If he loses, he must pay his debt through his own life insurance - truly a game of life and death. With his own existence at stake, he can only play passively, and the game comes to a head. Suddenly, a mysterious boy appears. His name is Akagi, a thirteen-year-old kid. The man senses a strong aura around the youth and decides to have Akagi substitute for him in the next round. Although Akagi knows nothing about mahjong, his natural talent and daring approach finally win the game. This is only the beginning for Akagi, who continues to face various opponents and becomes a legendary mahjong substitute player in the gambling underworld. AKAGI is based on the comic series by Nobuyuki Fukumoto, still running in the magazine Bessatsu Kindai Mahjong. Similar to Fukumoto's other masterpiece, KAIJI, in which he depicted various characters on the edge playing outrageous games of life-and-death, Fukumoto once again attracts audiences with this fantastical and unpredictable story.