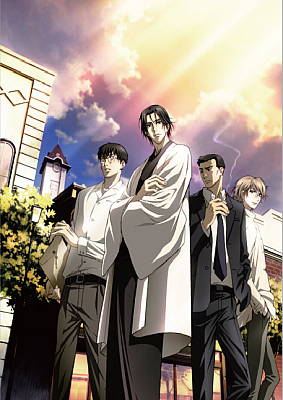 Can the evil spirits ultimately be expelled?

The second novel in the popular Hyakki Yako series by Natsuhiko Kyogoku, "Moryo no Hako," has finally been made into an animation series. A total of 9 novels have been published in this same series, with total sales that exceed 5 million copies. As demonstrated by having won the Mystery Writers Award of Japan, "Moryo no Hako" is novel that has continued to be advocated by a wide range of readers. It was also made into a live-action film in 2007. The new animation series is produced by MADHOUSE, with original character designs from the female quartet CLAMP.

Set in Tokyo just after the World War II, the lead character, Akihiko Chuzenji, is the owner of a used book store called "Kyogokudo" and is also a Shinto priest at the Musashi Seimei Shrine. As a shaman, Chuzenji is able to expel evil spirits and has thus unraveled several difficult-to-solve incidents. One day, beautiful young girls are murdered and their bodies are found mutilated. The daughter of a retired actress, Yoko Yuzuki, also goes missing. At the same time, a mysterious psychic who enshrines boxes, an enormous box-shaped building, and lies surrounding the boxes all become linked to mysterious incidents. In a quest to solve these mysteries, a private detective, Reijiro Enokizu, a writer, Tatsumi Sekiguchi, and a police detective, Shutaro Kiba, also become involved and all eventually end up at Kyogokudo.

Can the evil spirits ultimately be expelled?