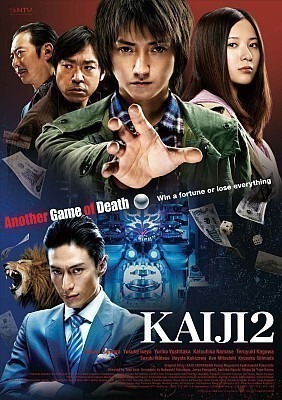 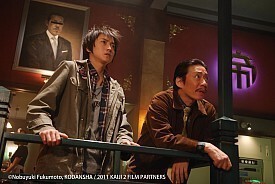 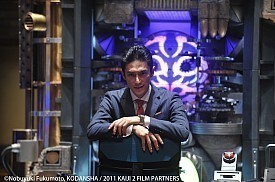 The fatal game battles have begun again!!
The much-anticipated sequel to the big hit movie, KAIJI, is about to hit theaters!!

Introduction :
Ever since first appearing in 1996 as a serial manga in Kodansha's Young Magazine, KAIJI has amassed a cult-like following, recording book sales of over 18 million copies and leading to a box office hit film adaptation in 2009 entitled: KAIJI. Now in 2011, the much-awaited second film is set to hit the screens as KAIJI 2, based on what many assert is the most popular episode from the comic book series, "The Greed Swamp". The author Nobuyuki Fukumoto was at the center of the screenplay writing process for the sequel, adding a new high-risk game of his invention to ratchet up the psychological intensity.

Story :
Surviving one death-defying game after another, Kaiji Ito manages to erase all of his debts. But within a year, he finds himself once again among the so-called "dregs" of society, choking under a new mountain of debt. Eager for another shot at turning his fortunes around for good, Kaiji earns a chance to take on a monster pachinko machine with a billion yen payout; a beast of a machine dubbed "the swamp." On paper alone, it poses a formidable challenge, but under the tight control of the illegal casino's ruthless manager, Ichijo, the machine is 100 percent unbeatable. What's more, a dark and telling secret exists between Ichijo and Kaiji who are the only two to have ever walked across a steel beam 300 meters in the air between two skyscrapers without falling to their deaths. Now with the "swamp" controlled by his biggest rival, Ichijo, Kaiji must turn to some unlikely fellow "losers" for help in Hiromi, Sakazaki and Tonegawa, the man who impeded his every step in the first movie. All four have their own reasons for the current depravity of their lives, but they all share one common trait: an insatiable desire to win back their lives in what is sure to be their last chance.