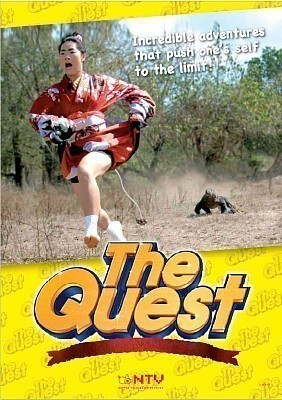 Traveling to the farthest reaches of the planet to uncover the world’s greatest mysteries and pushing one‘s self to the limit with incredible adventures. The Quest just might be the first program to successfully combine variety, science, and comedy!

Traveling to the farthest reaches of the planet to uncover the world's greatest mysteries and pushing one's self to the limit with incredible adventures.

Whether on land, at sea, or in the air, the world is full of mysteries and adventures waiting to be experienced. The Quest will travel anywhere in the world for the chance to take on any challenge, in a way that will surely make you laugh! (Of course, there are some mysteries that simply can't be solved...)

Their hilarious antics and nail-biting stunts will leave you on the edge of your seats. Check them out!

Example 1: Ayako Imoto visits the Ethiopian National Museum and finds fossils of the Ardipithecus, the forefathers of the human race. Here Imoto learns about human evolution. Imoto heads off to pray at the Mariam Korkor church, set on top of a 200 meter high cliff. To cap off her Ethiopian adventure, Imoto becomes an apprentice to a local family and attempts to tame wild hyenas by feeding them meat using her own mouth.

Example 2: Daisuke Miyagawa, who has participated in countless festivals throughout the world, will travel to Thailand for the eel festival and the slippery bamboo pole festival. He will compete to see how many eels he can catch with his hands, and see how fast he can climb the slippery pole. Tune in to see if Miyagawa will emerge as the champion.

The Quest just might be the first program to successfully combine variety, science, and comedy!