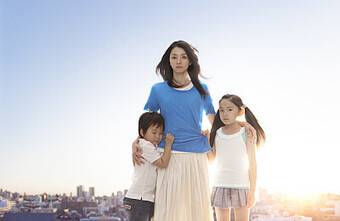 Tweet
Woman
-My Life for My Children-
Drama HD

A heart-gripping story of a mother’s unconditional love for her children and her economic plight in a harsh reality. The story serves as an anthem for all people who have ever had or have ever been a child.

The staff of the hit drama, "Mother", the MIPCOM BUYERS' AWARD of Year 2010, returns again with "Woman", another heart-gripping story of a mother's unconditional love for her children and her economic plight in a harsh reality. The story serves as an anthem for all people who have ever had or have ever been a child.

KOHARU (Hikari Mitsushima) is widowed by her beloved husband, SHIN (Shun Oguri), in an accident one day. Left with her two young children, Koharu is suddenly faced with a reality as a single mother. Determined to provide for her children, Koharu works day and night on multiple jobs, but it does not take long for her income and savings to fall into a downward spiral that leads the family into poverty. As a measure of last resort, Koharu pleadingly applies for public welfare, but there, she is notified that her own mother (Yuko Tanaka), who had deserted her family for another man twenty years ago, has agreed to offer financial support. Thus, she is told by the bureau that her application for welfare could not be accepted. To Koharu's knowledge, her mother was a heartless woman who never showed or had any maternal love for Koharu to the extent of being able to abandon her. Confused and skeptic that such a woman would even want to help her, the exhausted Koharu decides to confront her estranged mother to refuse any financial aid--as her mother was the last person on earth she wanted to seek help from--but upon doing so, Koharu learns an unforgivable truth about her husband's death...

"Woman" depicts a woman's fight to survive in a difficult world, whilst shedding light on problems rooted in Japanese society, in an ever-so realistic performance by Hikari Mitsushima, an acclaimed actress known for her brilliant acting skills. With a compelling script that takes you inside Koharu's struggles and her sweet moments with her two adorable children, the drama unfolds the daily life of a young family just trying to find peace and happiness...like anyone else.

"Woman" has received many awards in Japan and has been sold as a scripted format to Turkey, airing successfully for three seasons. The Turkish version, "Kadin", has been distributed to nearly 40 countries around the world.

In 2013, Woman" won the "MIPCOM BUYERS' AWARD for Japanese Drama" at MIPCOM. The MIPCOM BUYERS' AWARD was inaugurated through a collaborative project between MIPCOM and International Drama Festival in TOKYO to promote the high quality and solid entertainment value of Japanese content, and to distribute these globally.