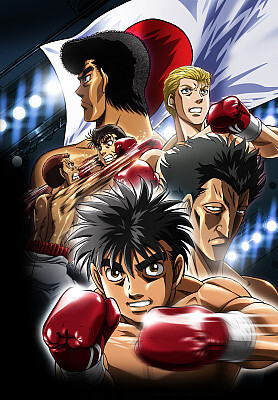 Hajime no Ipporeturns in October 2013 for its third series, Rising! Even after becoming the national champion, IPPO still hasn’t found what it really means to be “strong” and continues his search. Colorful characters surround IPPO in both thrilling boxing fights and heartwarming scenes to create a very human drama you won’t want to miss!

Hajime no Ippo: The Fighting! -Rising- is based on the wildly popular manga of the same title that has been serialized in Weekly Shonen Magazine and has broken through the 94 million total circulation mark (as of July 2013).
Nippon TV aired the animation series of this mega hit in 2000 and 2009. In the first two series, IPPO MAKUNOUCHI, the main character, was once a bullied boy who decided to become a boxer. The sport triggers his internal search for the true meaning of strength. IPPO endures the grueling training regimen that coach KADOKAWA, the tough but kind owner of the gym, puts him through and his steady ascent begins as he defeats his powerful opponents one after another. With the deadly Dempsey Roll technique at his disposal, IPPO rises to the top and becomes the Japanese national champion.
Having gained high acclaim both in Japan and abroad, Hajime no Ippo returns in October 2013 for its third series, Rising! Even after becoming the national champion, IPPO still hasn't found what it really means to be "strong" and continues his search. Colorful characters surround IPPO in both thrilling boxing fights and heartwarming scenes to create a very human drama you won't want to miss!

Highlights of Hajime no Ippo: The Fighting! -Rising-

The deadly Dempsey Roll, IPPO's signature move, helped him capture the Japanese national champion crown. SHIMABUKURO has boldly stated in public that he will destroy this move. Watch them slug it out with their powerful in-fighting!

The orthodox versus the unpredictable

AOKI, who has been training at the same gym as IPPO for a few years longer, goes for the Japan title for the first time! With so much on the line, AOKI will stop at nothing to protect what he has earned and win the title. His opponent is champion IMAE, who has given up everything and will do absolutely anything for the glory. This fight is sure to become a clash of wills!

The Dempsey Roll - will it go obsolete or will it evolve?

New challenger SAWAMURA criticizes the Dempsey Roll as an ugly move! Whether in the ring or out, SAWAMURA's behavior is constantly offensive. IPPO can't put up with such flagrant behavior and, for the first time in all his boxing years, puts his career at stake and vows to win at all costs. Will IPPO's Dempsey Roll stand the test of SAWAMURA's insane counters? A dangerous fight is about to take place!

TAKAMURA fights to win the world title in his second class. A fierce match that will go down in history!

TAKAMURA, a self-centered and arrogant egomaniac faces off against EAGLE, a kind and earnest gentleman for a world title match that showcases two polar opposites!