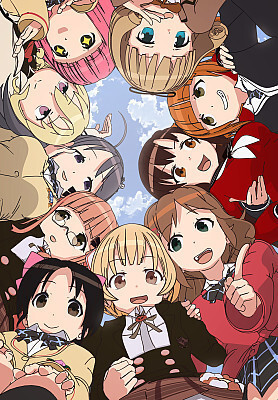 “Tesagure!” is back for its third season!

The wait is over! "Tesagure!" is back for its third season!

In season two, high school girls Yua, Hina, Aoi, and Koharu fumbled around to discover what their after-school activity is all about.

This time, the girls are joined by new friends in a collaboration project with "Minarai Megami Puru Purun Sharumu" (Apprentice Goddess Puru Puru Sharumu), the manga serialized by Kodansha.

Find out what unfolds when the four girls of "Tesagure!" join forces with the five goddesses Rin, Kanon, Hina, Yui, and Tomomi!

Tesagure! is an original work that was created using MMD, the innovative 3D computer graphics animation software. Up until now, the way that anime has been produced is by first creating images according to the story, then matching voice-overs later. The advent of MMD, however, allows for the process to be reversed. Voice-over actors can now talk freely because characters can be animated to match the sounds! Our voice-over actors took advantage of this method and dabbled at adlibbing some scenes, resulting in an anime you will surely enjoy.

Storyline:
There seems to be a lot of "after-school activity" anime lately. The story is usually about a group of girls who, for some reason, get to use a big room for their mysterious activities. Even over here, there seems to be an eclectic group of four uniquely charming girls...
"I've been thinking about joining an after-school club but they all just seem so boring."
"Hey! I found the perfect newbie for our club!"
"I couldn't find a cool club that everyone wants to join, so I'm here checking things out."
"Yeah! We should just make a fun club for ourselves!"
A club that doesn't know what its activities will be!? No doubt another one of those conveniently created cushy clubs! This "compelling" anime portrays the "typically anime" everyday life of four high school girls who find themselves starting up a new club and fumbling around to discover exactly what their activities will be.