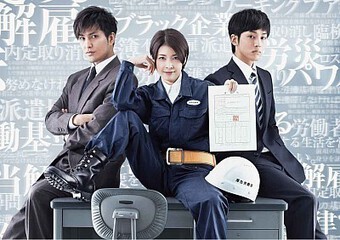 Dandarin Rules centers around RIN DANDA (Yuko Takeuchi), a 32 year old female labor inspector who battles against daily violations and breaches of the Labor Standards Law with her whatever-it-takes approach--which at most times can be just a bit too much. The story opens with Rin, who is newly transferred to the West Tokyo Office. A rumor of her as a known trouble-maker has already shunned down a nice warm welcoming, but that does not stall Rin's ambition one bit. Her new boss is DOTEYAMA (Kazuki Kitayama), a divorced man secretly tired of his dull bureaucratic routine job who does not want to bother with his new transfer. Doteyama appoints his subordinate to be Rin's personal adviser named KAZUYA MINAMISANJYOU (Tori Matsuzaka), an inspector in his fifth year who comes from a wealthy family.

On Rin's first day at her new office, she and Kazuya have a dispute of which company to visit next for inspection. As a result of their bout, Kazuya collides with a man on a motorbike who happens to be a salesman for an unscrupulous renovation company. Rin soon learns that the salesman is enduring unrelenting unpaid overtime, but he pleads Rin not to intervene as he would lose his job. But when the man tries to take his own life, a fire is lit in Rin as a heart-wrenching memory flashes back in her mind and drives her determination to make things right! As a strict observer of the law, Rin believes that her duty is to stand up against company wrongdoings and employers who exploit their staff... but all too naïve in a way, she does not yet know that such strong beliefs ...may someday cost her...her life?

Derived originally from "Dandarin 101", a popular comic series written by Takashi Tontami, Dandarin Rules is a story for every man and woman who has ever questioned any administration and its veneer of legality. The drama is spiced with comic relief and a sense of justice that tugs deep in the viewer's moral issues. Rin is comically played by Yuko Takeuchi, a popular actress who is known for her prestigious career and numerous hit dramas and movies.