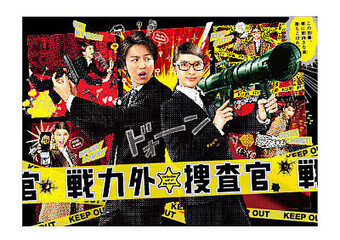 Based on "The easygoing police", written by Kei Nitadori, published by Kawade Shobo Shinsha Ltd. Publishers

Don't be fooled by her sweet innocent appearance... freshly out of college, young CHINAMI UMIZUKI (Emi Takei) is a new police officer who is dispatched to the 18th Investigation Division. Despite her cute looks, she is a candidate for an executive position due to her passing of the prestigious state exam, yet she is given a-cold -shoulder welcoming from everyone else at the division. Her colleagues see her as a policeman of titular rank lacking experience in the actual field. Thus, KYOSUKE SHITARA (TAKAHIRO / member of EXILE) is appointed as Umizuki's babysitter, and he is given orders to keep the young girl away from the crime scene as her bubbling and somewhat annoying enthusiasm could just complicate things. The duo is cast out of the investigative team and is forced to abide to their new tasks of cleaning the office. But with Umizuki's devious way of utilizing her ranking authority and with her almost psychic ability to read people's minds, she successfully manipulates Shitara into taking her out to the scene of the crime--a gun-shot murder case in which the victim is a junior high school kid. Will Umizuki and Shitara find the suspect, solve the case, and win the trust of the division?

Daring and bold, the all new heroine of The Easygoing Police is sure to capture the hearts of viewers young and old with her klutzy and her subtle but whatever-it-takes attitude to solve any case. Most police dramas tend to have a serious tone, but The Easygoing Police is slanted towards a light comedy, and the series is fit for the entire family with jam-packed entertainment of action and laughs! Emi Takei who plays the lovable Umizuki is a promising young lady who has won countless domestic awards for her skills as an actress. Supporting her is TAKAHIRO as the role of Shitara. TAKAHIRO is one of the lead vocals of the world-popular EXILE dance and music group, and this is his first time acting despite his natural knack for it.