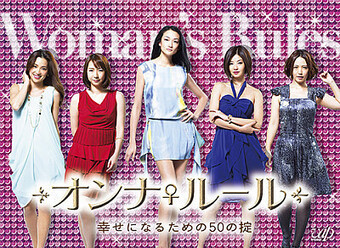 Being a woman in Tokyo is harder than ever, when you have to battle expectations of the old and new including marriage, sex, and having a career. The L♀Rules: 50 Words of Advice finds five bachelorettes in their twenties and thirties, all who bear such weight on their shoulders while trying to find true love in their confusing lives.

RISA (Ai Tominaga) is a tall, slender, 30 year old female photographer and the narrator of the story; she has spent a sexless year after her breaking up with her beau and is spending her days swamped in work. She daily retreats to "Cadre", the brasserie on the ground floor of her flat where she hangs around with her four neighbor-friends. KAORU (Anna Nose) is the most cool-headed of the five, strongly independent with a stoic poise in her profession as an IT specialist; but her love life is also zero or nothing in which she seeks total commitment or none at all. MIHARU (Wakana Sakai) is a diligent employee at a prestigious company; men are easily fooled by her prudish façade and they have no clue that she juggles three boyfriends after five on a daily basis. The dreamy NANAMI (Sayaka Isoyama) is a pro when it comes to one-night stands, but is a girlish romantic dreaming of her knight in shining armor to someday sweep her off of her feet. YUI (Anne Nakamura) is the attentive waitress at the brasserie, who often acts as a buffer among the other women with a steady boyfriend of three years. The five femmes confide and support each other as they talk about the raw truth from everything to sex, love, men, fashion, and their various views on life.

Ai Tominaga who plays Risa is a fashion leader and runway model, and she is supported by her co-stars, Anna Nose and Anne Nakamura who are models themselves. Additionally, to give the drama an extra sexy appeal, two former swimsuit models known for their womanly curves, Wakana Sakai and Sayaka Isoyama have been casted. The series is constituted of 50 short episodes that portray each woman's conquests in the hunt for love and sex as each story finishes with a "word of advice". Unfolding ever so entertainingly and buoyantly, The L♀Rules:50 Words of Advice is perfect for every woman out there (and men who should learn more about their significant other.)