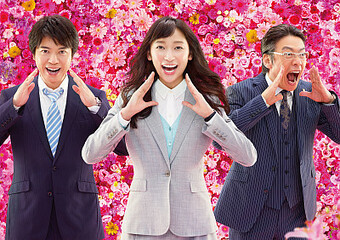 Nippon TV's 2014 mega-hit "Hanasaki Mai Speaks Out", which became the fourth most watched drama series in Japan that year, comes back for a second season!

Set in megabank Tokyo Daiichi Bank, "Hanasaki Mai Speaks Out" returns where it left off as HANASAKI MAI (Anne), the "relentless heroine", and SOUMA KEN (Takaya Kamikawa), the "hopeless middle-aged man", continue their bumpy partnership in this delightful drama. The duo will tackle the multiple scandals and problems that arise in the bank's branches throughout the country--lost cash, embezzlement, information leakage, accounting fraud, and calculated bankruptcy.

Two employees with neither power nor status stand up for their distressed colleagues who don't have the nerve to blow the whistle. Follow the duo as they brilliantly solve one problem after another.

"Hanasaki Mai Speaks Out" comes back bolder than ever!

HANASAKI MAI (Anne) is a competent bank teller, who in her short years on the job has proven to be an asset to the mega-bank she works for. Hanasaki has one single issue though--she cannot keep her mouth shut, once a thought crosses her mind. Hanasaki's boss is SOUMA KEN (Takaya Kamikawa), a middle-aged branch manager at the bank who is transferred to a new position at the headquarters. His relief from not having to see Hanasaki's face to put up with her outlandish ideas and demands is brief. Souma's enthusiasm is deflated the instance he meets his new assistant--Hanasaki! Despite Souma's personal grudge against her, the duo takes off as internal bank inspectors to foresee the non-discrepant procedure and transactions of all branches--a position loathed by their fellow bankers.

At their first on-sight inspection, the team encounters a banking error by a veteran bank teller in which 1 million yen goes missing. Everybody suspects an overdrawn account, but with her sharp instincts, Hanasaki senses that the problem is much deeper. Additionally, when Hanasaki learns that the female banker is being harassed by her despicable branch manager, a volcano of anger erupts. Hanasaki opens her mouth in protest with her usual punch line, "With all due respect...!" According to Souma, the less Hanasaki says, the sooner mended! But Hanasaki is unstoppable--her pertinacious ways always finds the truth in whatever problem they face in every stand-alone episode of the series.

Hanasaki is played by Anne who is no newbie in the entertainment business. Anne started her career in modeling at the age of 15, and has gradually built her acting career over the years. She is a true meritocrat on the rise who continues to land leading roles since her first star role in a drama series back in 2011. Takaya Kamikawa who plays Souma began his career as a stage actor. He is also known for his acting skills and has starred in countless dramas and films. Derived from the hit novel series by Jun Ikeido, the same author of the Naoki Hanzawa series, Hanasaki Mai Speaks Out! is a story about female empowerment that takes the viewers into an inside-look of bank bureaucracy, fraud, and scandal.