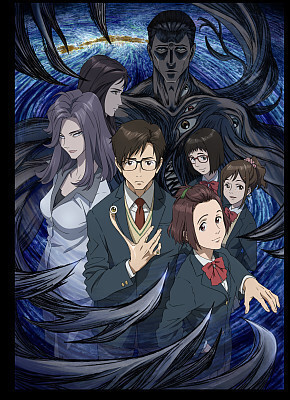 Shinichi Izumi and the parasite on his right arm, “MIGI”―their bizarre friendship and the battle that begins.

Shinichi Izumi, an ordinary high school kid, is suddenly attacked by a "parasite" that came flying to Earth. The parasite missed Shinichi's brain by a hair but attached and assimilated itself onto his right arm. It calls itself "MIGI", which means right in Japanese, to honor its location and begins a peculiar symbiotic relationship with its human host.

Distressed that he can't tell anyone about what has happened, Shinichi soon finds himself developing something similar to a friendship with MIGI.

Shinichi and MIGI are suddenly confronted by other parasites that start to appear and kill people. The situation escalates as people also start killing the parasites. Shinichi's childhood friend and classmate Satomi finds herself in danger.

In the midst of this situation, Ryoko Tamiya shows up as a high school teacher who leads the parasites into discovering their own sense of worth.

The parasites begin to realize that they were born to cull the humans who continue to destroy Earth.

The humans fight to live on and begin killing the parasites.

"Who deserves to survive?"

The Earth and their loved ones need to be protected.

As values waver, Shinichi and MIGI throw themselves into the battle between humans and parasites

This animation is based on Hitoshi Iwaaki's popular comic series that was published on Kodansha's Afternoon from 1989 to 1995 and boasts a total sale of 11 million copies(as of Aug 2014).