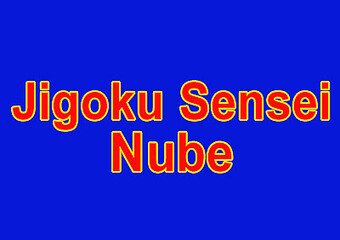 NUBE (Ryuhei Maruyama) (pronounced noobay) is a new teacher at Domori High located in the fictional town on the outskirts of Tokyo. Although Nube is passionate about his students, they find their teacher to be a bit uncool and make fun of the black glove on his left hand. His students wish and whine that their teacher was not Nube, but the other new transfer, TAMAMO (Mocomichi Hayami)--the narcissist home-education teacher with a flawless face. There is a bewitching charm about Tamamo which instantly makes him the most popular faculty member at the school. RITSUKO (Mirei Kiritani) is the pretty chemistry teacher who has a disliking for unscientific things. So she does not understand Nube's interest in the spiritual world despite his interest in her!

One day, the psychic Nube senses a strange sensation of a lurking ykaimonster within the school corridors. True enough, Domori Town is the location of the Tenguzuka burial--a gateway to the world down under which someone had opened to unleash monsters into the town! At first, students do not take Nube seriously, since his explanation for every strange incident at the school seems to be linked with the acts of a ykaimonster. But when bizarre mysteries continue to occur, some students begin having second thoughts... And little do they know that Nube's glove-hidden hand possesses demonic powers of hell to return these dead ghouls back to where they belong.

The clumsy protector who tolerates battery from unrelenting ykaimonsters, is played by Ryuhei Maruyama. Maruyama is the bassist and rap vocal of the growingly popular idol group and band, Kanjani ∞, and this is his first leading role in a drama series. Co-starring Maruyama are model and talents, Mocomichi Hayami and Mirei Kiritani. Ex-member of K-pop unit KARA, Jiyoung makes her official Japanese acting debut in the cute role of Yukime, a snow ghost who is saved by Nube in her younger years and avows to become his wife someday. A succeeding version to the popular manga and anime known worldwide, Jigoku Sensei Nube is sure to become an entertainment drama for everyone with a splendid cast, great ykaimonsters, and fantastic visual effects.