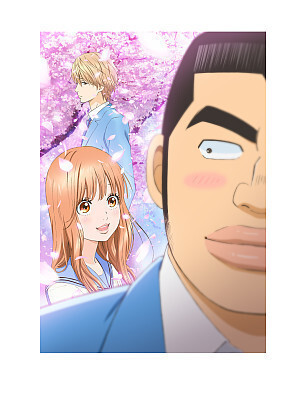 A hit manga that has won numerous awards and is now set for remake as a TV animation series!

Takeo Goda is a high school freshman. He's probably around 2 meters tall, weighs about 120 kilos, and is straight-laced, clumsy, and obtuse. The girls show no interest in Takeo but the guys totally dig him! All the girls he's been interested in have fallen for Makoto Sunakawa instead, who happens to be Takeo's really good-looking childhood friend and next door neighbor. The handsome Makoto has a cool demeanor and comes across as unapproachable but he's actually a nice guy who cares a lot about Takeo.

One morning on the way to school, Takeo and Makoto see Rinko Yamato, a high school girl, being groped on the train. They come to the rescue and Takeo instantly falls for Rinko, but he assumes that her eyes are probably set on Makoto anyway. Indeed, it was love at first sight for Rinko as well, but it was actually the not so good-looking Takeo who stole her heart! This love story depicts their thrilling and exciting romance.

The original manga is currently serialized in "Bessatsu Margaret" by Shueisha. Volumes 1 to 7 of the comics have sold over 3 million copies! "MY love STORY!!" is a hit manga that has won numerous awards and is now set for remake as a TV animation series! It is a happy and innocent love comedy that features the gigantic rugged hero Takeo Goda and the people who touch his life. This anime is sure to leave you feeling nice and easy.