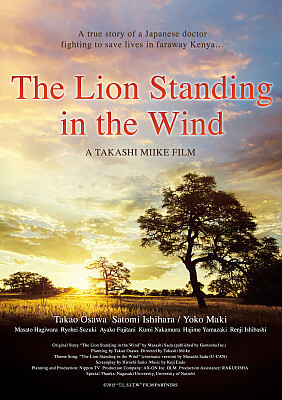 Tweet
The Lion Standing in the Wind
Feature Films

In 1987, a song named "The Lion Standing in the Wind" (Kaze ni Tatsu Lion) was popularized by a Masashi Sada. It was a musical adaptation of letters to a girlfriend left behind in Japan, written by a Japanese doctor running a mobile medical clinic in Kenya. The catalyst for this project was actor Takao Osawa, who was deeply moved by the song and passionately urged the songwriter to adapt the song into a novel, and then a movie.
World-renowned director Takashi Miike, who directed 66thCannes International Film Festival's Competition title "Shield of Straw" assumes the helm in the film adaptation. Takao Osawa will play the leading role of Koichiro, a Japanese doctor who travels across the world to join a medical team in Kenya, where he encounters a child soldier with deep, emotional scars. The popular young actress Satomi Ishihara will play Nurse Wakako, who supports Koichiro's efforts in Kenya. Yoko Maki, recent winner of both the Best Actress and Best Supporting Actress honors at the 2014 Japan Academy Awards, will play Takako, the girlfriend Koichiro leaves behind in Japan.

In 1987, a Japanese doctor, Koichiro (Takao Osawa), is dispatched by a university hospital to a research facility in Kenya, Africa. This is a dream posting for Koichiro, whose medical career was inspired by Albert Schweitzer, a lifelong medical missionary in Africa. This assignment, however, also meant a long separation from his girlfriend, Takako, also a doctor, who had taken over her father's practice on a remote island in Japan.
The idealistic Koichiro is soon requested to work for one month at the local Red Cross Hospital. He is shocked by the overwhelming numbers of wounded child soldiers who are drugged and forced into combat, and decides to stay at this hospital. Dispatched from Japan to the same hospital is an extremely capable nurse Wakako (Satomi Ishihara), and while butting heads, the two develop a bond of mutual respect. Welcoming the wounded boy soldiers with a warm "Okay! Daijobu!" Koichiro becomes not only their trusted doctor, but also their friend.
One day, a child soldier named Ndung'u is carried into the hospital. Suffering from gunshot wounds, Ndung'u's greater trauma was witnessing his parents' massacre in front of his own eyes. Drugs mask his deep emotional scars. Koichiro confronts the boy's physical and emotional wounds head on, but...

This inspirational story recounts the "baton of hope" passed on by a Japanese doctor in the magnificent setting of Kenya.