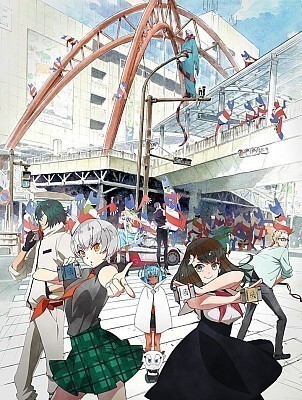 A year has passed since the "Tachikawa Incident" occurred in Tokyo's Tachikawa City during the summer of 2015. The CROWDS, who embody the spiritual essence of humans, are now being widely used by people from all walks of life. This behavior is promoted and encouraged by Japan's prime minister, Seitaro Sugayama.

Those who disapprove of the CROWDS have been spending their days worried and dissatisfied with Sugayama's policies. Suddenly, the plane carrying the prime minister is attacked by a mysterious group.

The winged warriors take on their next battle. Niigata Prefecture, in the northern part of Japan, sets the stage.

An unidentified spacecraft crashes near the house of Tsubasa Misudachi, an ordinary high school girl. Tachikawa "CAGE" G-CREW member Hajime Ichinose arrives to investigate. Just when the neighbors have gathered to watch what's going on, an alien from another planet emerges from the spacecraft. Known as Gelsadra, this alien is reputed to have brought peace to countless planets.

Tsubasa, Hajime, and the other GATCHAMAN meet the peace messenger Gelsadra. What will this encounter bring to the world?

Hajime Ichinose  G-101
Bubbly and bursting with energy, this 16-year old GATCHAMAN is the heroine. Hajime is an artsy high school girl who is into all things pretty and cute. Just when she was starting to crave more excitement in life, she gets recruited by J.J. Robinson to become part of the G-CREW.

Sugane Tachibana  G-96
Sugane is a 19-year old high school senior who is wise beyond his years. A champion of justice, he has been part of the G-CREW for 5 years and is a samurai at heart.

Joe Hibiki  G-89
Serious government employee by day and dart aficionado by night, Joe is a 10-year veteran of the G-CREW.

O.D  G-12
O.D is 1.9 meters tall and is the G-CREW life of the party. He claims to be an unfortunate GATCHAMAN who doesn't possess the ability to transform. O.D does not participate in regular G-CREW missions.

Utsu-tsu  G-99
This 15-year old is a year behind Hajime in the same high school, but has a completely opposite personality. Shy and with very low self-esteem, Utsu-tsu barely speaks to her fellow G-CREW and prefers to tend to the flowers over at the park where she volunteers.

PAI-MAN  G-3
This tiny alien creature measures only 33 cm in height but is actually the oldest GATCHAMAN. He fully admires J.J. Robinson and puts utmost faith and importance on the latter's predictions. PAI-MAN claims to be the leader of GATCHAMAN at Tachikawa "CAGE" and gives orders to the other G-CREW members.

Berg-Katze
Berg-Katze is 2.15 meters tall and claims to be from outer space. He is a phantom figure whose actions and intents are completely shrouded in mystery.