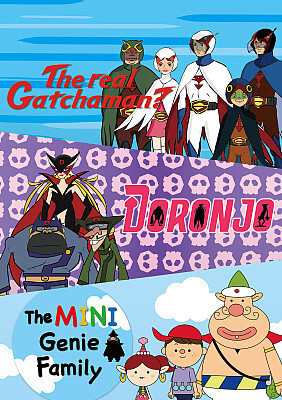 All the characters are classic favorites that have been extremely popular in Japan! Now, these hit original characters are coming back for a mini anime series produced especially for a Nippon TV infotainment show!

The original version is "Science Ninja Team Gatchaman," which is about a secret society of Galactors who are conspiring to conquer Earth, and a team of five young men and women put together by Dr. Nambu, who use their ninja powers to battle the invaders. In this minute-long mini anime, these characters come back in comical transformations that will surely make you laugh!

The original version "The Genie Family" is about Hakushon, a genie who pops out of the bottle whenever someone sneezes, and Kan, the owner of the bottle. Hakushon grants the wish of whoever calls upon him. The original characters appear in this new flash anime that highlights the issues of modern society, all with a comedic touch.

Doronjo, Boyacky, and Tonzura, the three villains of the legendary anime "Yatterman," are revived in this new flash anime. In "Yatterman," the incredibly beautiful Doronjo confronts Yatterman, a champion of justice. This time, however, Doronjo's nemesis is not Yatterman. It's "The Real Gatchaman?"! Watch as they battle it out in this miraculous collaboration of two of Japan's greatest animations!!