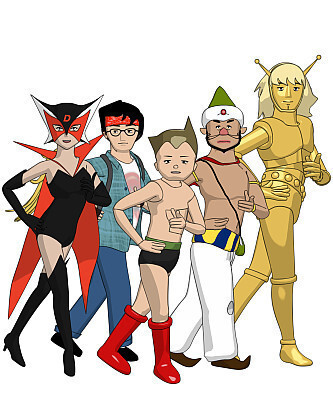 Bursting out onto the scene in 2009, this short animation improvisation comedy extravagantly uses computer graphics to create scenes that bring half-smiles to your face.

Casual daily conversations usually have moments of "pauses" and "meaningless gestures," all of which are skillfully captured and put together in these 5-minute short adlib comedy episodes. Characters are portrayed using "lavish" 3D computer graphics techniques--a process that is unlikely to be used during standard anime production but has nonetheless created a wave of half-smiling fans.

Two years ago, the show's characters collaborated with the legendary Japanese characters of Tezuka Productions and Tatsunoko Production to create "Peeping Life Tezuka Pro Tatsunoko Pro Wonderland." The entire country was stunned to see that the characters, which are considered to be national icons, had transformed so much!

"Peeping Life" is surely on a roll as it collaborates once again with Tezuka Productions and Tatsunoko Production to bring forth a television series!

Wildly popular Japanese characters Astro Boy, Triton, and The Genie Family are slated to return and will be joined by Cobalt, Doronjo, and others who will be appearing on the show for the first time. Even as a television series, the show will surely take you into the world of half-smiles!