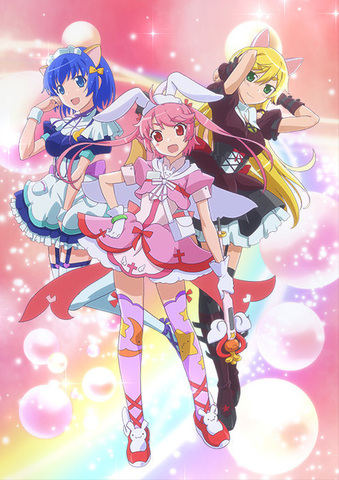 Komugi Yoshida is a slightly clumsy junior high school girl whose vivacity is her redeeming quality.

She is pursuing her dream of becoming a pop idol along with her classmate and close friend Cocona Saionji as well as with cross-dresser Tsukasa Kisaragi. Unlike Cocona, whose popularity is soaring, and Tsukasa, who is considered "the" charismatic cross-dresser, Komugi's low-key live concerts at the local shopping promenade pale in comparison. But she has a dream and enjoys juggling her pop idol life with her junior high student life.

One day, a mysterious, wounded creature, Usa-P, appears in front of Komugi. As she gently tends to its wounds, Usa-P notices Komugi's kind nature and asks her to become a legendary girl with magical powers. For some reason, Komugi reluctantly agrees to take on the role of the legendary girl and suddenly ends up in a battle with a strange beast! Komugi, who assumes the name of "Magical Nurse," finds herself constantly battling bizarre creatures.

Meanwhile, as "Magical Maid" and "Magical Sister" make their appearances, could a three-way battle be brewing!? Can Komugi handle being a junior high girl, an idol and a magical nurse? And what will be the outcome of her numerous battles and what will become of her dream?