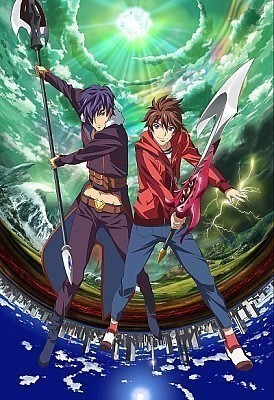 What destiny awaits when there two young ment meet?

This is an adventurous fantasy depicting ENDRIDE, a world on the other side of Earth.

Shun Asanaga is a typical 15-year-old junior high boy with an optimistic outlook and a sunny disposition.

His father, a scientific sholar and businessman, runs a company where, one day, Shun happens to discover a mysterious crystal.

As soon as Shun touched the crystal, his world suddenly warped and he found himself sucked into ENDORA, a world on the other side of Earth.

Meanhile in a castle in ENDORA, a young prince by the name of Emilio, who had just celebrated his 16th birthday, harbored a deep hatred toward Delzaine,the reigning king.

Since Emilio became of age to succeed the throne, he armed himself and was finally ready to carry out his revenge, but was no match for the powerful king who captured and threw Emilio in prison.

As he was drowning in deep despair, a prison wall suddenly warped to reveal Shun.

One boy longing to return home to his world and another longing to fulfill his revenge begin their adventure in ENDORA.

What future lies ahead for these two young men, brought up in different worlds?