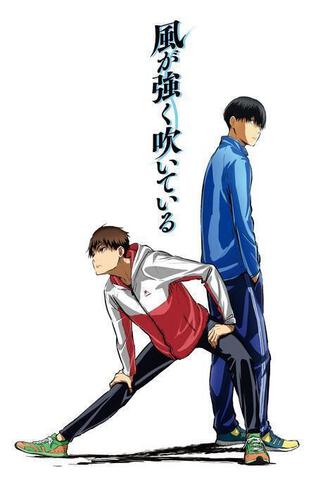 In his attempt to flee, Kakeru Kurahara runs through town one fine evening. Suddenly, a bicycle appears at his side. The total stranger asks, “Hey, do you like running?” The guy’s name is Haiji Kiyose. Before he realizes it, Kakeru is led to an old apartment building named Chikuseiso, where nine interesting characters live. Egged on to take the last available unit, the reluctant Kakeru finally gives in. Never in his wildest dreams did he think he would become the “10th man.”

"I just want to know what running is all about." One chilly night in March, Kansei University senior Haiji Kiyose comes across Kakeru Kurahara along a dark street and is struck by his extraordinary running prowess. Kakeru is practically coerced into living in Chikuseiso, fondly called Aotake, an old apartment building-turned-dormitory.

Haiji is full of dreams and ambitions. An injury during high school forced him onto the sidelines but he never lost the desire to show the world his best running form and compete in the Hakone Ekiden, the pinnacle of relay marathon races. But he only has one year left to turn his dreams and ambitions into a reality.

Chikuseiso houses this eclectic mix of colorful personalities, but little do they know that it is actually the Kansei University Track and Field Training Camp. Haiji uses the carrot and stick approach to encourage them as they, a team of ten, endeavor to conquer Hakone.

With Kakeru's warped perceptions and difficult past, the limits of his teammates' physical and mental strengths, and the various walls and obstacles that impede them, will they succeed in overcoming the mountain?

"Running is all about strength, not speed--the strength that comes from being you and forming a bond with someone else."