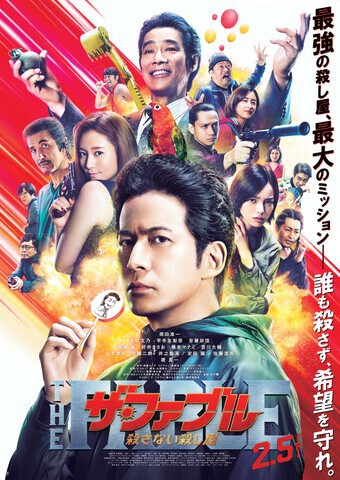 Tweet
THE FABLE: The Killer Who Doesn’t Kill
Feature Films

The ultimate mission for the toughest hitman!

Save a girl from a ferocious double-dealing villain. Without killing anyone.

Give him 6 seconds and he could kill anyone...

The Fable (played by Junichi Okada) is a legendary hitman feared in the underworld. One day his boss orders him to, "kill no one and live like a regular man for a year." Given a new identity as Akira Sato, Fable starts anew as "a regular man" with his partner Yoko (Fumino Kimura), who pretends to be his younger sister. He lands his first-ever regular job at a graphic design office where his child-like drawings amuse his employer (Jiro Sato) and colleague, Misaki (Mizuki Yamamoto). Everything appears peaceful in the town but evil lurks in the shadows. Utsubo (Shinichi Tsutsumi) runs a non-profit organization for the "protection of children" but behind this facade he meticulously plans the deaths of youths. Together with Suzuki (Masanobu Ando), a formidable assassin, Utsubo makes a complex plan to kill Fable to avenge his brother's death. Oblivious to the plan, Fable encounters a woman named Hinako (Yurina Hirate) who doesn't recognize him but years earlier he had failed to save her in an assignment and now she is in a wheelchair. Little does he know that the reunion will turn his peaceful life upside down...!