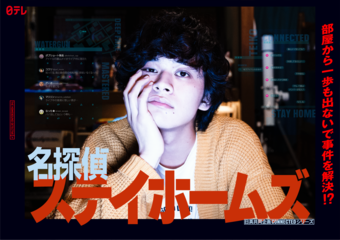 CONNECTED： Based on the format CONNECTED co-created by NIPPON TV and Envision Entertainment (Michael Nakan)
CONNECTED: The Homebound Detective：©NIPPON TV

It combines both online screens and conventional single camera set-ups, with the story unfolding in a shared universe where characters from all over the world are ‘connected’ to each other online, using their superior research skills to solve crimes. These international sleuths form an exclusive online community and are known as Homebound Detectives, working primarily from their homes also with their own problems, stories and mysteries to tackle. This series has been specifically designed to expand to a number of localized versions, featuring diverse characters from different countries, while all belonging to the same shared online universe.

The Japanese version of CONNECTED (“CONNECTED: The Homebound Detective”) broadcast in Japan on Nippon TV in April 2022, featuring a twenty-something year old protagonist in Tokyo struggling to solve a crime with the help of his international online peers. In the process of probing research, the group uncovers a much larger mystery, which provides a launchpad for future productions around the world.

Envision Entertainment and Nippon TV are simultaneously in advanced development for a UK version of CONNECTED which is set in the same shared universe.

Ataru Aida lives with his mother and has never moved out of his childhood room. A clean freak since he was a little boy, Ataru hates to go out and is cynical and seriously lacking in communication skills. He was having a blast with his work-from-home situation brought upon by the COVID-19 pandemic when, one fateful day, he is fired for having an attitude problem.

Desperate without an income, Ataru surfs the net in hopes of relieving his frustrations and discovers that his favorite pop idol is having an affair with a married man. Using his internet search skills, he gathers information and connects the dots with his deductive reasoning, as if he were a seasoned detective. But Ataru doesn’t stop there—he exposes the extramarital affair and earns praise from netizens. With some lauding him as if he were a hero, his ego inflates. Getting a bit too smug, he posts hateful and slanderous comments, causing him to be charged with defamation.

Amidst Ataru’s predicament, he gets a visit from a Metropolitan Police Department investigator. “I want you to help us with your research abilities. If you cooperate, I’ll wipe off the charge against you,” proposes the officer. Will Ataru’s investigation, aided at times by his friendly team of “online detectives” from all over the world, lead him to successfully solve the difficult case?