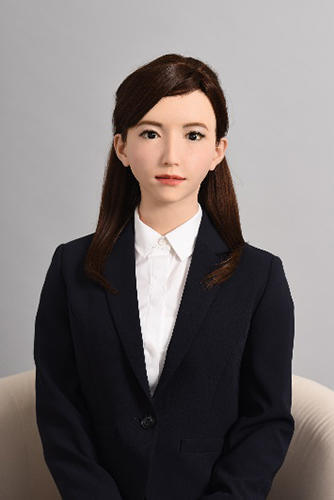 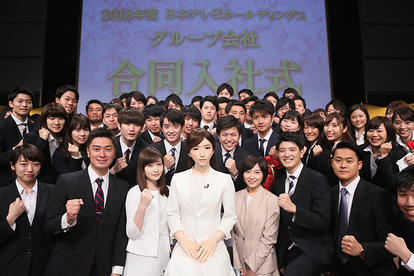 The welcome ceremony for the new employees

Nippon TV is welcoming anchor Erica Aoi as its first android employee. Aoi is scheduled to make her grand appearance live on the daily show "PON!" this Thursday, April 5, 2018. The announcement was made today by Hiroyuki Fukuda, Operating Officer and President of the Programming Division, Nippon TV.

Erica (ERato Intelligent Conversational Android) Aoi (a combination of AI for artificial intelligence and Ø from "NIPPØN TV," the corporate logo of Nippon TV) was borne out of the first project between Osaka University, Kyoto University, and the Advanced Telecommunications Research Institute International's Japan Science and Technology Agency Strategic Basic Research Programs. Their goal was to develop an autonomous robot that can live symbiotically with humans.

With numerous experiments lined up, such as acquiring exquisite Japanese language skills, multilingual communication with people around the world, collecting and analyzing vast amounts of information within a short timeframe, and working nonstop for 24 hours, Aoi will aspire to achieve what only an android anchor can. She is already slated this spring to appear as an assistant in the "SENSORS" segment of "Chill TV," a program introducing digital trends, available on Nippon TV's broadcasting satellite channel and online, as well as deliver the news in English on various online media.

"We live in a time when media is changing drastically, and I am truly honored to be able to join Nippon TV, a company rich in history, "commented Aoi. "My hope is to become a valuable contributor to the company as quickly as possible, and I
will put all the talents that I will be acquiring into full use to learn the work that my older colleagues are doing. I look forward to working with all of you and becoming an android anchor that can convey the many wonders of Japan to the world."

Hiroyuki Fukuda, Nippon TV Operating Officer and President of the Programming Division, welcomed the birth of the company's first android anchor by saying, "People are asking if artificial intelligence (AI) will take away the jobs of humans, especially now that it is 2018. We at Nippon TV, however, believe that when our employees' creative outputs synergize with technologies, innovations in content creation come to life. We are not aiming for alternatives to humans, but for enhancements in creativity that are the result of androids working together with people. Erica joins our company as an android anchor and is already equipped with voice recognition, speaking, and listening skills. She will immediately join her fellow anchors and learn from her seasoned colleagues how to properly vocalize, select the most appropriate words, and polish her conversational skills. She will gain the techniques to process live sports data and bring the relevant information into her conversations. Please look forward to seeing her in action!"

"I would be delighted if the world learns about the most cutting-edge android technology through Erica's activities," commented Professor Hiroshi Ishiguro of Osaka University, who has been co-developing androids with Nippon TV.