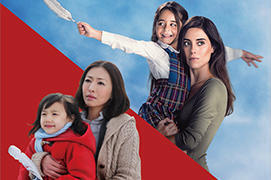 MFYAPIM series "Mother" won the Special Award at the Tokyo Drama Award held on October 26th, 2017. MF Yapim CEO Faruk Bayhan and MEDYAPIM CEO Fatih Aksoy were present to accept the award in Tokyo. "Mother is a remarkable TV series with its successful production and its power to create awareness sociologically. It has been very popular in Japan in the past years and it was the first time a Japanese drama was offered as a format in our country. The drama became a mega hit instantaneously when it aired in Turkey. We are very happy with the success, and also to receive this special award. We aim to have this drama aired in over 80 countries" stated Mr. Aksoy of MFYAPIM.

Founded in 2008, Tokyo Drama Awards recognizes excellent dramas that Japan is excited to bring overseas. In order to achieve further global exposure of the nominated dramas, the award's judging criteria places emphasis on "marketability" and "merchantability" rather than "artistry" or "show quality". This "Special Award" is presented to excellent dramas produced outside Japan for better cultural understanding and business partnerships.

"It is the first time that a Japanese format receives this award, and we cannot be more honored that our drama's gripping story captured the hearts of viewers in Turkey and lead to this award. The Turkish version is going to be aired in many international countries and we look forward that drama lovers around the world will enjoy this everlasting drama." Commented Mr. Atsushi Hatayama, President of International Business Development at Nippon TV.

About "Mother/ANNE" Turkish version:
Zeynep is a young woman who has a fear of intimacy due to her being abandoned.
When Zeynep was abandoned by her mother Gonul at the age of five, she was adopted by rich woman Cahide. Her real mother Gonul killed Zeynep's father when Zeynep was a child and she was sentenced to prison. Even though Cahide loved and raised Zeynep as her own child, Zeynep has grown up to be a lonely, introverted girl for being an orphan.
After graduating from college, Zeynep wanted to participate as a photographer with a bird migration-tracking group of a university. As bureaucracy holds her back with this plan, she agrees to take another job while waiting.
She starts working as a teacher but she doesn't like the position much because her nature is cold and distant. However, she meets little Tuğçe at the class who will change her life forever.
Melek is a positive, hardworking and cheerful kid who has a lot of joy despite the physical and emotional violence she is exposed at home. When Zeynep gets news about her trip, she stops by at Melek's house to say goodbye. She finds out that Melek was left to die in a garbage bag. This becomes a milestone for Zeynep. She accepts that she must be the savior of Melek.