NIPPON TV'S POPULAR FORMAT "SILENT LIBRARY" LICENSED TO THAILAND AND MONGOLIA.
These two countries now join more than 15 countries including the US and the UK.
Marks first time this format gets adapted in Southeast Asia and East Asia.
New options in Singapore, India, Malaysia, The Philippines, Indonesia, Vietnam, and Cambodia makes this one of the most influential comedy shows in Asia. 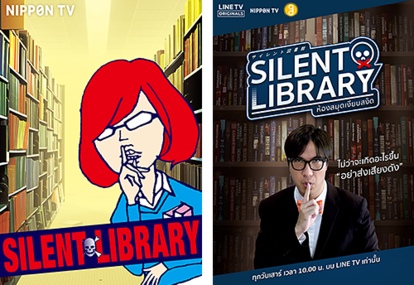 Nippon TV is proud to announce that its popular unscripted studio comedy game show format Silent Library is hitting digital airwaves for the first time in Southeast Asia and East Asia. It will air from September 15th, 2018 on Line TV in Thailand and from mid-November on VOL+ / Mongol TV HD / and its VOD service ORI, in Mongolia.

The Silent Library format boasts an impressive international track record, with a localized version aired in more than 15 countries including the US and the UK. This marks the first time this format gets adapted in Southeast Asia and East Asia. Furthermore, new options have been made to 108 Media (Singapore) who will produce the show in Singapore, India, Malaysia, The Philippines, Indonesia, Vietnam, and Cambodia, making Silent Library one of the most influential comedy shows in Asia.

"Southeast Asia and Mongolia are both extremely exciting markets for content creation, where the local production expertise improves year after year. We are honored to have our legendary unscripted format chosen to supplement their growth strategy. I am confident that the local adaptations will be successful. This long-running format is still incredibly popular today in Japan; a lot of young people even endeavor to join Nippon TV with hopes of becoming one of the creators of the show. It is a must-see program that is innovative, genuine and hilarious. I sincerely pray that the Thailand and Mongolia versions become long runs and we will offer our utmost cooperation to ensure their success; I would like to see all the people in those countries burst out in laughter!"
Commented Mr. Atsushi Sogo, President of International Business Development, Nippon TV.

Comment from Thai chief producers from LINE TV and Good Deal Entertainment:
"Silent Library would be your perfect choice after your long week, when you just want to sit back on the couch and laugh a little bit. You're in need of a little comedy. Let this show be your weekend happiness."

Comment from Mongol TV Series producer Ms. Saruul Bold:
"We are happy to bring over first Japanese content in Mongol TV. We've been always amazed by its entertainment of Japanese shows. We believe this comedy show will attract more young people. Mongol TV team is looking forward to produce this new show."

ABOUT SILENT LIBRARY
Silent Library has been a primetime, family-oriented television sensation in Japan and is considered to be one of the most influential comedy shows in Asia. Created by the popular Japanese comedian Hitoshi Matsumoto, Silent Library has been a successful segment on the long-running Nippon TV Sunday night variety show "Downtown No Gaki no Tsukai ya Arahende!".
Contestants must keep silent at all times no matter what happens. There are 6 contestants, 1 librarian and other people who sit randomly at the tables in the library. During the show, a certain number of obligatory "pranks" are given to the contestants. However, they must keep silent because there are in library. There are no prizes or awards to the winner; however, how much they can get away with in the show without having to try a prank is an implied incentive for the contestants!

ABOUT MONGOL TV
Mongol TV is one of the leading independent television channels in Mongolia.
Proud to be heading the expansion of Mongolian Media Market, first launched in 2009, Mongol TV has re-launched in 2013 reinstating its predominant goal to invest in and educate the nation through non-biased informative news coverage and high-quality entertainment programming.